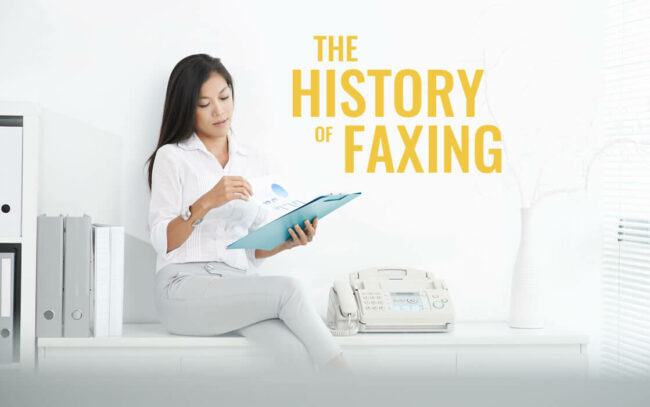 The History of Faxing and Evolution of Fax Technology

Have you ever wondered how and why we started faxing? Or how faxing itself has evolved over the years to the point where it’s at now? And sure, faxing is far beyond its prime, but with the emergence of online fax services, this form of communication has yet become the talk in the business world.

But let’s stick to the main point of the article. Faxing has a long history, and it’s certainly come a long way, even in just the 21st century alone!

Today, we’ll reveal how it all began and why faxing has become a mainstay of modern communications.

The first fax machines were very primitive, and they lacked many of the capabilities you see today. Still, as you’ll see, the technology was impressive for the time period. After all, we’re talking about the 19th century! But first things first.

It started with Scottish inventor Alexander Bain, who you may recognize as a man who invented the electric clock. Well, a few years after his first major breakthrough, he was ready for his next endeavor. He used elements from the clock to assist in his invention of the fax machine – specifically the movement of two pendulums for line-by-line message scanning.

Using that technology, Bain was able to scan a document on a line-by-line basis and then transfer it. Despite this breakthrough, the image sent was of poor quality. He patented the invention on May 27, 1843, and faxing finally came into existence.

However, that was just the beginning. Several inventors would improve on Bain’s machine over the next half-century.

Frederick Bakewell and Giovanni Caselli made arguably the biggest improvements. Once they were through with it (around 1865), people could send images over telegraph lines. This is even more impressive when you consider that workable telephones wouldn’t be invented for the next 11 years!

That’s why 1865 is considered to be the birth of the commercial fax machine. That is when Caselli, with a little help from French inventor Leon Foucalt, started a long-distance fax transmission between Paris and Lyon (extended to Marseille in 1867).

Without steady and consistent competition within the fax industry, fax may not be where it is today.

There seemed to always be different types of fax machines and different inventors competing with each other throughout the decades. That way, the fax machine started to become more and more advanced, slowly evolving into the similar ones we use today.

There was Shelford Bidwell in 1880, who made it possible to scan two-dimensional originals without manual plotting or drawing. Then Elisha Grey in 1888 made it possible for users to send signatures over long distances.

The innovation continued in 1924 when Radio Corporation of America (RCA) invented the wireless photoradiogram, which led to the first picture transmitted through radio fax. In that same year, AT&T sent the first color fax using wire transmission (also invented by AT&T).

All of this competition and innovation led to the following developments in fax:

As a result, fax became more and more widely used. Banks like Western Union began using radio fax receivers regularly, and the US army even transmitted its first photograph via fax to Puerto Rico in 1960!

In 1964, the world of faxing witnessed a massive breakthrough. That is the year when Xerox introduced its first commercial fax machine.

This machine could be connected to telephone lines and transmit letter-sized documents in 6 minutes. This set the standard for sending and receiving faxes, made it less expensive, as well as increased its popularity and usage.

Below, an ad for Xerox’s MagnaFax Telecopier, the first machine to be mass-produced and marketed: 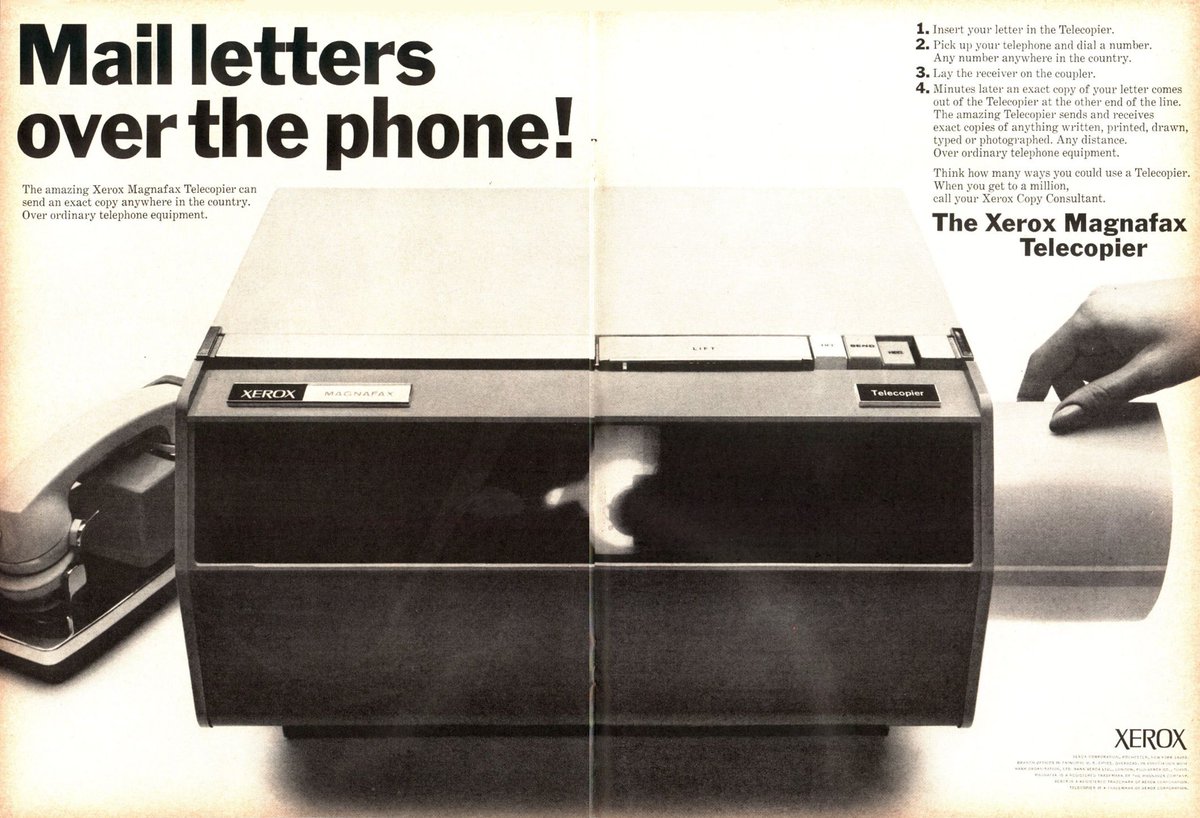 Xerox continued making improvements to the machine, and other companies stepped in as well. That allowed the fax system to grow through the 70s, creating a revolution in the world of business.

Once again, competition reigned supreme and allowed for lots of fax innovation, leading to another huge development.

Then in 1985, before the internet was in full swing, Hank Magnuski, founder of GammaLink, created the first computer-based fax board. This allowed computers to join the network of fax machines, which still dwarfed the internet at that time. This helped dramatically increase the number of US-based fax machines. Their number rose from 300,000 to over 4 million by 1989! In a matter of 5 years, fax systems became the most important way of transmitting documents across American businesses.

This trend continued throughout the 90s and can be described as the golden age of the facsimile machine. In the early 2000s sending a fax was still a main way of communication. Still, with the growth of alternative communicators, including email or cell phones, their popularity began to decline, especially in homes.

The beginning of the 21st century also introduced yet another use of facsimile machines. All thanks to the 3D Fax becoming a method of scanning and transmitting 3D data. Firstly used to scan Michelangelo’s David and other pieces of art. It was later used as a way of sending binary files over a fax machine.

Fax machines ruled the stage throughout fax’s history. However, that has changed in the 21st century. More precisely, in 2010. That’s when internet faxing arrived, allowing sending faxes without using a traditional fax machine. Nowadays, you can send a fax without even having to use a single paper page.

More and more people are canning their clunky fax machines in favor of simple internet fax services. These apps have streamlined faxing and have enabled those who don’t typically fax to embrace the technology when necessary. All without the need for their own machine (or a trip to the store).

By using an online fax service, you will be able to fax your documents fast, using your phone, computer, tablet, or any other device you want. All it takes is setting up an account, choosing your subscription option, and downloading an app.

Such technology not only makes it easier to send and receive faxes, but it’s also more time and energy-efficient and better suited to today’s on-the-go lifestyle. Thanks to services such as FaxBurner, everyone can enjoy sending and receiving faxes without having to spend their money on fax machines.

Interestingly, though, such a solution is also becoming more popular among businesses. And frankly, it shouldn’t surprise. Sending a fax through an app is secure, cost-efficient, and decreases paper usage.

How Does Fax Work?

Now that we’ve finished our history lesson, you’re probably wondering, “Okay. But how exactly does a fax machine work?” Well, you’ll be happy to hear that that’s exactly what we’re going to clarify right now.

Here’s how the process looks step by step:

It all happens extremely fast. So fast that it’s hard to imagine that in the late 60s, it took over 6 minutes to sen only a one-page document. Nowadays, we’re able to send multiple files in a matter of seconds.

From its humble beginnings in the 19th century to the golden age of the late 80s and 90s, the history of fax is rich and eventful. And while in recent years, sending documents using fax has lost its former glory, the invention of online faxing has yet again put this technology on the pedestal. Well, maybe not pedestal, but you get the idea.

So where does it go from here? Does it evolve again? Will it slowly become a dinosaur? For now, faxing is still commonplace around the world. Fortunately, thanks to our ability to ditch the machine and switch to an app, it’s easy to comply for as long as this technology stays around!

The real question is – what can companies like FaxBurner do to make this system even more efficient? We’ll probably have to wait a few years to get an answer. One thing is certain, though. The fax technology is alive and well, and there’s no sign of it going anywhere.

Get My Free Fax Number

FaxBurner is a simple, elegant iOS and Android app that lets you send and receive faxes online, via email, or using your phone. Get started for free!

Ever want to fax
from your phone or email? 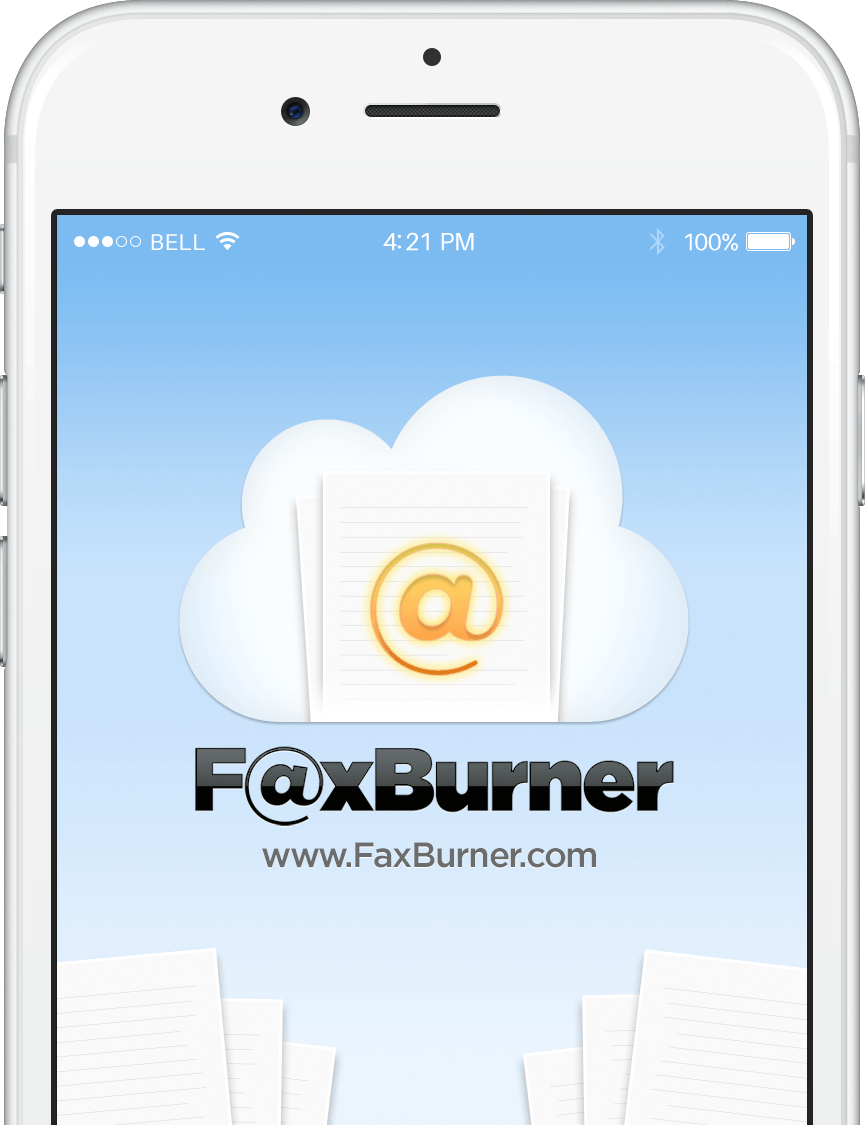 Do you sell by phone?

Have 3x more conversions with no extra effort, and hit quota faster.

Your sales team is leaving
money on the table every day!

Stop wasting time on tedious, repetitive tasks and have up to 4x more conversations.
Try dialing leads with PhoneBurner, for free – no credit card needed! 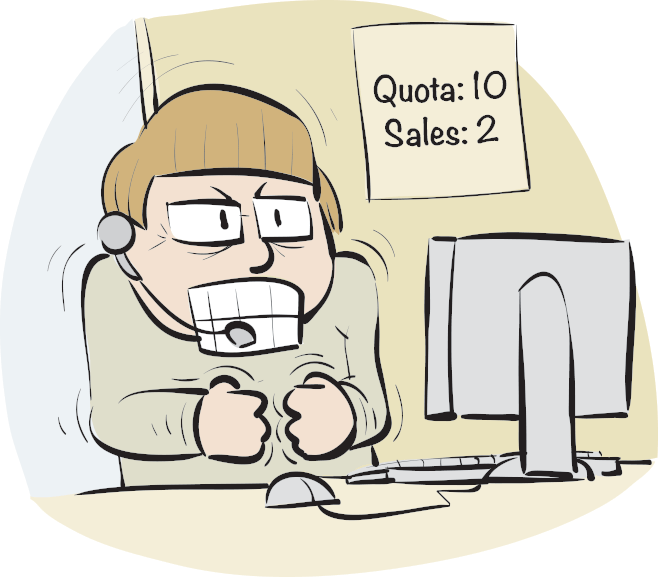